A question often asked is  ” Why are there two churches in the Parish of Wootton?”

The reason is that when St Mark’s was built it was in the Parish of Arreton.

In June 1908 a public meeting held at Wootton Council School ( the old school in New Road ),voted to initiate the project for a proposed new church. The Bishop of Southampton presided assisted by the Rector the Revd Coleman and other local clergy. The Bishop spoke of the need for a new church given the distance from the mother church at Arreton. Effectively this would be a new Parish with the incumbent responsible directly to the Bishop. A site offered by Col Holford was suggested until it was pointed out that the land in question was actually in Wootton parish. The option , which was eventually settled on was to purchase land from a Mr Vincent. which was done with the aid of a donation from Miss Shedden.

After much discussion the firm of Jenkin’s was appointed as builders.The company had also built the new Quarr abbey.

The foundation stone was laid by the Bishop of Southampton on 29th April 1909 . The Bishop was presented with a silver trowel and mallet to mark the occasion .The well known architect, Percy Stone was appointed as architect.

The dedication service held on August 29th 1909, was also performed by the Bishop. He was assisted on this occasion by the Revd Miles Atkinson and the Vicar of Newport, who read the lessons. The congregation included a number of local dignitaries. The Bishop spoke of the generosity and dedication which had led to such swift completion of the project, and to a new Christian witness in the area.

The music was provided by the newly formed choir accompanied by Harry Sait , who was organist here for many years.

At that point only the nave and chancel had been completed at a cost of £1500. Another £500 had still to be raised. The News report recounting the occasion describes the building as being in the Perpendicular style , in red brick and Bath Stone with a slated roof , and windows of cathedral glass.

Among the fixtures and fittings was a carved corbel donated by Percy Stone, the Architect  It is undoubtedly a copy of the ones in St Edmund’s Church on which the rood beam rests. The one in St Mark’s may be found on the South side of the Nave near the chancel.

St Mark’s was however still not finished according to the original intention. There was an organ chamber and belfry still to come, for which Miss Scott had promised a bell. The organ chamber was finished by August 1913. The bell  tower was never built though an attempt was made to build one in the 1970s.

In 1925 the Diocesan authorities finally made known their decision to amalgamate the Parish of Wootton and the conventional Parish of St Mark’s, Wootton Bridge as a cost saving measure. By April 1925 the amalgamation had been achieved, though arranging an acceptable program of services took some time.

THE WAR YEARS AND AFTER

By 1940  war time constraints were beginning to make themselves felt.

Fuel shortages made heating the churches difficult, and in 1944 winter services at St Mark’s were suspended owing to the cold   Later that year the Fuel Controller requested that all services should take place in one church

Air raids meant bomb damage and the roof of St Mark’s suffered as a result. By 1944 considerable anxiety was expressed regarding the state of the roof.Owing to damage caused in air raids in 1941 tiles were constantly falling.

St Mark ‘ church was requisitioned as a Rest Centre in 1944, while the ground at the rear was used for growing vegetables. This meant that the authorities would be responsible for the roof, water supply and sanitary arrangements.

In April St Mark’s was finally derequisitioned. The roof would require repairs costing around £600. Conversion into a Hall had been discussed but  was at this stage impractical. Therefore the proposal was, with the consent of the Diocesan Board of Finance, to let it out, sell the furnishings and put the proceeds towards repairing the roof.

So from July 1946, until 1969 St Mark’s became a furniture store first let to Pickfords and later to Messrs. Mew. The lessees and the Parish were to share the cost on insurance.

Meanwhile the furnishings were sold or disposed of. The font is recorded as having been given to St Augustine’s Church in Bermondsey. The organ an Estey of American Manufacture, eventually ended up in America.

St Mark’s remained closed until 1969 when Revd. George Rayner made the reopening of St. Mark’s a condition of his taking up the post of Rector.

Much had to be done to fit St. Mark’s itself for use. Volunteers set to work to clean and refurbish the building.

The other major project was to construct a hall at the rear of St Mark’s.

A direct appeal, with some money in hand, enabled the first stage to be put in motion, such as the preparation of the site for the hall. Being built upon solid gravel, it was considered unnecessary to lay a foundation of hard core. The concrete base cost something in the region of £1,000. Two Irish labourers erected the basic Banbury pre-cast sectional building (about £1850).

Furnishings of all kinds were acquired from a variety of sources. By Easter 1970 the church was ready, (just) for the formal reopening. The first part of the hall was then complete and the rest followed in the same year.

A large congregation attended the service on Easter Day 1970, with priest in full vestments, servers in albes carrying candles. The first two servers were Paul Sheppard and David Saunders. In the evening a packed congregation was there for the rededication ceremony.

By the mid-1970s, not only had the congregation grown, but so had the choir (there were 15 boys) and the chancel was confined by the side walls. giving little scope for more seating.

It was decided that the only way to solve this problem was to build extensions on both sides of the chancel, by removing the brickwork in the arches, giving more choir stall space, and modifying the somewhat ‘tunnel’ atmosphere of the original chancel.

During the years that followed a sustained campaign for the consecration of St. Mark’s finally succeeded. The consecration took place on December 2nd 1984. 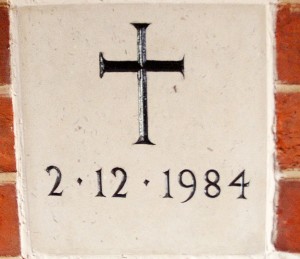 Spring is coming and the snowdrops are out in S t Edmund's Churchyard. Why not take a look ... See MoreSee Less
View on Facebook
· Share

Spring must be coming. The snowdrops are out in the churchyard ... See MoreSee Less
View on Facebook
· Share

With reluctance we have decided to cancel the Christingle Service due to the current public health situation. Christmas services in or near Wootton are as follows:Christmas Eve - Midnight Mass (11.30pm) at Holy Cross, BinsteadChristmas Day - Holy Communion (10.30am) at St Mark's, WoottonBoxing Day - Morning Prayer (9.30am) at St Peter's, Havenstreet ... See MoreSee Less
View on Facebook
· Share

24th Nov 21:Come and join us for Christmas crafts and painting. Little ones can paint their own salt dough figures that they made last week or paint readymade ones to keep or gift to someone special. Grown-ups can relax with a hot drink and biscuits whilst the little ones enjoy themselves. ... See MoreSee Less
View on Facebook
· Share

17th Nov 21: Come and join us for Christmas crafts and games. Little ones can make their own salt dough figures to keep or gift to someone special. Grown-ups can relax with a hot drink and biscuits whilst the little ones enjoy themselves. ... See MoreSee Less
View on Facebook
· Share

Reverse Advent Calendar (image attached)Isle of Wight Foodbank Manager Hannah King says: ‘Christmas is a very tough time to be hungry – it’s cold and it is heartbreaking to know you cannot give your children a Christmas treat when everyone else is celebrating. Hidden behind closed doors there are many Island families with little to look forward to this Christmas, the good news is we can all help. We hope that the Island community will join in with our Reverse Advent Calendar to help local people with little to look forward to a happier Christmas.’ ... See MoreSee Less
View on Facebook
· Share